At the stadium – alone & nervous!

The sea of runners! 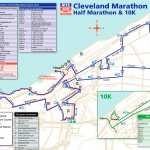 Fuel for the trip… 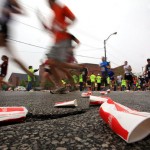 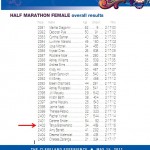 It’s hard to explain the experience, but it was amazing.  Although it was a little scary going through it alone, it was still worth it.  When the race starts and you see THOUSANDS of people running together, it is so cool!  It was so crowded that in the beginning I was anxious for people to move so I could just GO.   😉   Of course the pack stretches out eventually, but I was never running alone.  Sometimes in a 5K, there might be a good amount of distance between me and other runners.  That never happened here, and that was pretty cool too.

I wore a jacket that had sleeves that zipped off.  It was chilly and raining so I thought I’d need the jacket, but the sleeves came off after about a mile!  I managed to keep them tucked in my waist band for awhile, but I lost one of the sleeves somewhere along the course – oopsie.  Of course there were plenty of people to willingly discarded clothing along the route, but I was trying to hang on to mine!  Oh well.

I ran with my own hydration belt and ate Gu Energy Gels along the way to stay fueled.  I had read during training that your have to add in some fuel after about 90 minutes of activity to avoid muscle damage and even just muscle fatigue.  There are plenty of water stations and usually fuel stations at big races like this, but I didn’t want to rely on that.  I really wanted to run the entire race without stopping for any reason.  Aside from that, the water stations are huge traffic jams and drinking from a cup of water while running is really tough.  My water bottles were easy to drink while running, and the Gu fit in my hydration belt really easily.

One of my favorite things about a huge race like this is that they have pace teams.  There’s a designated runner that carries a sign with the time on it.  The time is based on the full marathon, so I was able to stay with the 5 hour team knowing that would get me to the finish in 2 1/2 hours for the half.  This is important for me to make sure I didn’t go too fast and burn out but also to know if I started lagging behind.  I wish all runs could have pacers.   😀

There was so much great crowd support along the course, even with the light rain.  I almost cried a couple times just from being overwhelmed at what I was doing and from all the support.  There were people cheering me on that I didn’t even know.  Having your name on your race bib is cool because I could hear people yelling “Go Tanya!” as I ran by.  SO AWESOME.  There were so many funny and motivating signs too.  Seeing signs like this helps because some make you laugh, some pump you up, and some just take your mind off how much longer you have to run.  Here are some cool sign examples to give you an idea of what I mean: 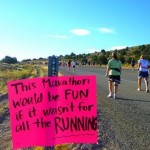 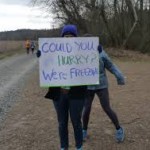 See what I mean?  How can you feel alone with support like that?  Who would ever want to quit or not do their best with so many people cheering them on?!  I know it sounds crazy, but the time goes kind of fast.  I had it broken down into smaller segments in my mind, so I would be sure to hydrate and fuel at certain intervals so that it would last me the whole race.  There were huge signs at each mile marker and police directing traffic and keeping the course safe.  There were ALL different types of people from young kids to senior citizens.  I even saw a spectator wearing a cape with a sign telling us the WE were the super heros!!!

When I was done, of course I was sore and tired, but not like you would expect.  I had trained for this, and I was on cloud nine.  I didn’t get to stay and celebrate with the other runners because I had a baby shower to get to, but the high feeling lasted all day!  I did feel the need to find a bathroom, like urgently.  Apparently I had more Gu during the race than I had during training because I never had this issue during training.  I also felt like my face was covered in sandpaper.  Did you know how much salt comes out of your body when you are sweating for 2 1/2 hours?  I didn’t realize!  By the time I made it to a bathroom, I actually had dried salt on my face.  HARD CORE.   😀

If you would have told me 2 years ago that I would be here today, I would have laughed in your face.  Two years ago I couldn’t even go to the grocery store or work in the yard.  Today I ran for almost 2 1/2 hours.  It is mind boggling.  I did it.  You can too.  Whatever goal you think it unattainable, you are wrong.  If I can do this, anything is possible.  Start today.  You can do it.  YOU GOT THIS.

#exercise #running
by Tanya
Leave a Comment
previous: On my way!
next: Fingers crossed…