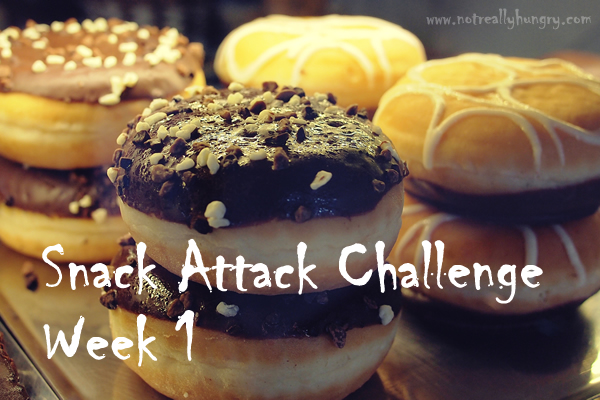 I started a 30 Day Challenge for myself on May 19. You can read about my motivation in my Confessions of a Late Night Snacker post.  I’m a little late in posting my weekly recap, probably because I’m not exactly proud of my week. DAY 1 – MAY 19
Day 1 was a success!! I was gone most of the night because I had a hair cut and stopped at the store on the way home. Once I got home, I felt much more choosy about my snack. Knowing that I couldn’t multi task and eat while watching TV and knowing that I was only having ONE snack forced me to really think about it. What was worthy of my one snack tonight? I chose a golden delicious apple and a cheddar cheese stick. It’s a simple snack but the apple just sounded really good tonight! Maybe I had my fill of chips the past few days!

DAY 2 – MAY 20
I stuck to my plan for day 2, but it wasn’t easy.  It was REALLY hard not to eat a snack in front of the TV. I had to finish my snack and THEN watch TV with the hubby. It felt weird not to pick the snack that would last the longest. At 9:15pm, I was dying to eat something.  I knew that I was going to bed in less than an hour. I didn’t need to eat anything, but I still WANTED to. I don’t know why I wanted to eat. Is it just habit? Was I bored watching TV? It’s so annoying!

DAY 3 – MAY 21
Day 3 was a success. We made a last minute change to our dinner plans and I happily spent 19 points on homemade pizza. Thank you, weekly points allowance.  We watched a movie and I did not snack while watching! We took a break to make coffee and I had my mini bar in the kitchen. My hubby was so cute…he had a snack in the kitchen with me so he didn’t tempt me! It wasn’t as hard as it has been in the past… Yay! I did have to get some gum towards the end, but I still didn’t do any mindless eating!

DAY 4 – MAY 22
We are gone all evening, so I didn’t really have a chance to snack too much.  I didn’t feel quite right off and on all night… headache and nausea. I thought I was feeling better but the drive home brought it back. I had toast to try to settle my stomach before going to bed.  I really, really wanted to eat something else but I went to bed instead.  Once I was in bed, I could hear my husband crunching on his chips downstairs. It’s possible that I was imagining punching him.  It’s TOTALLY not his fault, but it’s so hard not to be jealous that he can eat when I’m trying not to.  Sigh.  I try to remind myself that I could eat if I wanted to, but then I wouldn’t get the results I want.  I know it is always a choice, but it doesn’t always feel that way.

DAY 5 – MAY 23
Saturday was a rough day for me!  I wasn’t feeling well most of the day – headache and nausea just like the night before.  I didn’t go to my group run because I was feeling so yucky.  I think I was comfort eating and I cheated and ate in front of the TV.   I did really well tracking everything, so it wasn’t totally mindless.  That’s progress I guess!

We went to the birthday party for my twin nieces Saturday night and I did pretty well tracking there too. After the birthday party, we stopped at the store and realized we were both HANGRY because we hadn’t eaten enough at the party.  That’s where things spiraled out of control.  We were both so hungry that we couldn’t imagine waiting 30 minutes to eat when we got home.  We should have gone back in the store for a healthy snack or split a protein bar or something.  Did we do that?  Of course not. Hangry people do not make good decisions.  We stopped at Steak n Shake for 4th meal around 9pm.  I could have ordered a salad, but I didn’t. I ordered a double burger and fries. SMH. I was just too hungry to care I guess.

When we got home, I was TOTALLY not hungry but still had the urge to munch. I tracked it but still had about 3 different snacks that I didn’t NEED!  I also hadn’t looked up the points at dinner before eating, so I had that sabotaging thought “you’re already over…you might as well…”

DAY 6 – MAY 24
It is amazing how much better things look the next day. After an awful Saturday, I woke up feeling focused and committed and not at all tempted.  It just goes to show how much being tired or not feeling well leads to poor decisions for me!!!  I did snack a bit more than I should have Sunday night, and I think that was directly related to not really enjoying my dinner.  I tracked everything, so that’s a positive.

DAY 7 – MAY 25
I ran a 5K Monday morning on Memorial Day.  There was a pancake breakfast afterwards.  I tracked it but was feeling a little stressed that I had used 14 points on JUST breakfast!  I managed it by having a lower point lunch and dinner and felt satisfied.  Then we decided to go to the movies and it was like I instantly stopped caring how many points I had left.  I took my own popcorn and a mini bar so I was only spending 5 points, but I’m more concerned with how quickly I threw my plan out the window!  Where is my commitment?  Do I really want to hit my goal more than I want to snack?

It would have been fine if I would have stopped with the 5 points I had taken with me to the movie, but of course I didn’t.  We got home after 10pm. It was bed time.  I still felt the need to eat.  I don’t even remember now what I had because I wasn’t tracking it.  If I had tracked it, I would have had to face it, right?  Ugh….I’m so frustrated with myself!   Obviously it wasn’t amazingly delicious if I don’t even remember what I had.  I do remember the feeling though.  I was tired and feeling stressed that I was up too late. I was also worrying about the next day and felt anxious about volunteering at a school.  Guess what? Eating didn’t change any of that.

I know that I am only human, but it is really frustrating to me that I still struggle with this.  I thought after 5 1/2 years following WW that I would be over this.  I guess that just goes to show I really DO have a problem with food.  I have lots of thoughts about compulsive eating and Overeaters Anonymous that I will share in a future post.

My week 1 started out strong. I went off course a few times, but I’m not giving up.  The more I talk about it and reflect on why the overeating is happening, the better I’ll be able to stop it.  Week 2 is going to be better!

#snackattack #struggle
by Tanya
2 Comments
previous: Weekly Weigh In ~ 05/26/15
next: Before and After ~ Barbara