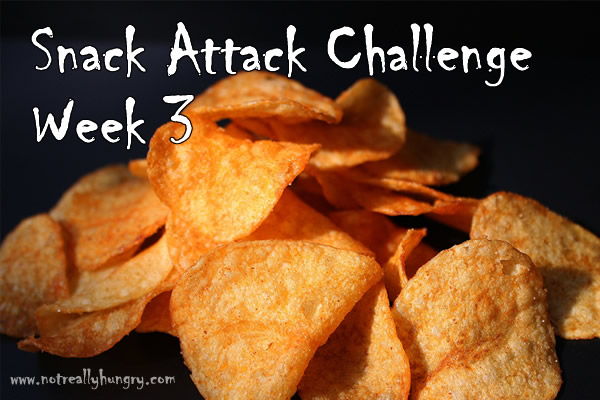 I started a 30 Day Challenge for myself on May 19. You can read about my motivation in my Confessions of a Late Night Snacker post.  I’m posting my weekly recap on time for once, but I don’t really want to post it. I don’t want to admit how bad I’ve been doing. I’m pretty sure I failed to meet all of goals this week.

DAY 1 – JUNE 2
After doing pretty decent for 6 days, I went off the rails again after my weigh in. WHAT IS MY PROBLEM? I had an AMAZING dinner and was totally satisfied. We went to visit my parents so I didn’t even get home until after 9. In the span of about an hour, I managed to polish off about 23 points. I say “about” 23 because I honestly don’t remember if I ate something else that I didn’t track or not. It’s pretty humiliating to admit it, but that’s the whole point of the challenge. I need to face my behavior in order to fix it.

I wasn’t upset or stressed out. There was no major event that I can recall other than being tired and maybe wanting to treat myself for doing well the rest of the week. I knew I was overeating and didn’t care. I told myself I would start fresh the next day.

DAY 2 – JUNE 3
Today was a good day. It’s amazing how I can do so horrible one day and so well the next. Obviously I felt like I needed to make up for the day before because I chose and apple and laughing cow cheese for my evening snack.

DAY 3 – JUNE 4
Again with the multiple snacks….8 points for snacks instead of 2…….
I’m beyond frustrated with myself. I had a delicious homemade burger for dinner that was very satisfying. Why did I need to graze all night?

DAY 4 – JUNE 5
I was not feeling well most of the afternoon and had a really bad headache. I pushed through and got my grocery shopping done so I wouldn’t have to worry about it over the weekend. I felt productive and happy it was done, but of course I didn’t have time to prep anything. All the food that needed portioned or was going to be used in a recipe was left sitting out for Saturday. I was fine with it but I wonder if subconsciously the clutter was bugging me. I can’t stand clutter and it tends to make it hard for me to focus. I didn’t do horrible, but I had 10 points in snacks that I truly didn’t need. At least it was portion controlled and tracked.

DAY 5 – JUNE 6
Saturday is where things went really downhill. I ran 6 miles in the morning, which I was super excited about. We went to a new park in the afternoon and stopped at an outlet mall. Then we had to figure out where to eat. Sigh. We went somewhere that I wasn’t really excited about and I was starving. I just didn’t want a salad, no matter how awesome the salad was. I ordered a grilled chicken sandwich and the chicken was like leather. They brought me a fresh chicken breast, but it was still just not a satisfying meal. I was full but not satisfied.

That night I spent at least a full day’s worth of points on eating one thing after another. I couldn’t seem to get satisfied. Again, I was full. I just wasn’t satisfied. I really don’t even know how many points I spent because I wasn’t tracking anything. I just kept munching away. I was super tired. I should have gone to bed at 8pm. I just didn’t WANT to. I felt like a big baby. It was a Saturday night, so I wanted to do something, not go to sleep. Well, I did something alright. I watched some TV I didn’t care about and stuffed my face. (Hangs head in shame…)

I’m so frustrated that I feel like I ruined all my efforts from that morning’s run. I’m pretty sure I ate back all those calories plus some!

DAY 6 – JUNE 7
I did well all day. I was trying to “start over” from the previous awful night. I had an awesome dinner, and I was working on meal prep all night. I was making healthy food for the week and not just watching TV and stuffing my face. I was doing great. Then at about 9:45, it was like my brain just shut down. I was SO tired, but I still had a few things to finish before bed. I was measuring out servings of crackers, and I just started eating them. Then I got out cheese to go with the crackers and just kept eating it while I was continuing to work on my other healthy food. Then I had a WW peanut butter square and a spoonful of peanut butter (not measured). I honestly can’t remember if I had something after that, but once I was done with my food prep and loading the dishwasher, I took a cup of milk and two servings of cookie chips into the living room and ate them while watching the end of the Cavs game. I’m not done yet! After that I had a serving of BBQ rice cakes and a cheddar cheese stick. And finally I topped that off with mango almond thins.

So CLEARLY I need to set some kind of boundary to stop eating after 8pm or 9pm or something like that. When I am overtired, I just keep eating. I don’t know why I can’t seem to stop it or don’t WANT to stop it. In retrospect, I wish I would have stopped. In the moment, I didn’t care.

DAY 7 – JUNE 8
I was determined to finish the week on a positive note. I had 4 points left for snacks after dinner. I used my 4 points but of course still wanted more. I debated how to handle it but I wasn’t feeling strong enough to resist completely. I had a cup of frozen grapes and an apple. I know that is a better choice than a bag of chips, but it was still a couple hundred calories I didn’t need to spend! At least it was an improvement over the previous few days!

REVIEW:
My week 3 was really not good. Why is it that the harder I try to do well, the worse I do? A month ago I was frustrated that I wasn’t losing, but I was also having an easier time not going overboard. Ugh. I think the most important part of the challenge for me is the journaling. I have not been doing it every night. If I would write about my feelings instead of eating, I think that would help a lot. It’s almost like I’m trying to live in denial with myself…if I don’t track it or journal about it, I can pretend it didn’t happen. But I can’t really. It’s still there in the back of my mind eating away at my self confidence.

I usually don’t feel like I need will power because I know ultimately that everything is my choice. Instead of telling myself “I can’t have that,” I tell myself “I’m choosing not to have that because…” Usually that works for me but the past few weeks it hasn’t seemed to. Many people would say that it’s only a few times and that I shouldn’t worry about it. Every time I give in, it makes it that much easier to give in the next time. Every time I made the right decision, it builds my strength and confidence to make the right decision again. I need to practice those good decisions and fake it until I make it this week! Week 4 is going to be better! I will finish strong!