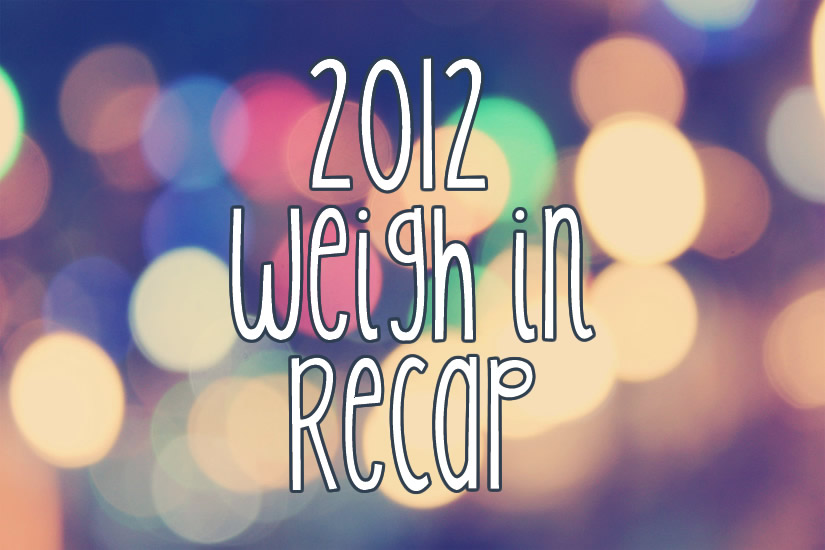 Well, 2012 was a much tougher year than expected. I was SO excited to start working for Weight Watchers at the end of 2011. I started as a receptionist and quickly trained to be a leader and location coordinator. I thought helping others would be so rewarding, but I didn’t end up feeling like I was helping others all that much. I was too overwhelmed and overworked. I stopped taking care of myself. I was at WW so much while working that I didn’t want to attend another meeting as a member. Plus I guess I felt that I shouldn’t need the meeting since I was so saturated in the topics while preparing to lead my own meeting.

Once I finally gave up the 2nd job, it was hard for me to go to meetings because I was embarrassed about quitting. I was afraid people would judge me or not treat me the same. It seems silly when I think about it, but feelings are not rational!

I only attended 31 meetings out of 52. It’s better than 50%, but it is not what I need to be successful. I was losing steadily at the beginning of the year, but that was only because my job with WW was on the line. (You have to stay within 2 pounds of your goal to avoid being on probation.) As soon as I hit my lowest weight, I began stress eating again. I was stressed having two jobs and dealing with the internal struggle between doing what was best for me and doing what was best for others.

I gained 19 pounds between April and December!! I’m ending this year 15 pounds over my WW Lifetime goal. I should note that I’m still down 72 pounds total, but it’s hard to be excited about that when I’m gaining week after week. I feel a little out of control right now and I need to get it together before this 15 pounds becomes 25 or 50!!